Bob is the Director of Hardware Development at LS Research. He has over 30 years of experience in the development of low power wireless communication systems. Bob is a graduate of the University of Illinois (BSEE 1980) holds four patents, has two patents pending, and is a winner of Electronic Design News (EDN) magazine's "Excellence in Design" award for development of the world's first frequency synthesized walkman portable radio.

What are the FCC rules and requirements for MBAN devices?

The Federal Communications Commission (FCC) regulatory requirements are generally present in Subpart E of Part 95, which sets forth technical requirements that apply across all Personal Radio Services. Although the rules have not yet been formally revised, the FCC has indicated that they will apply the existing MedRadio provisions in Part 95 to MBAN operations, modified as necessary to refer to MBAN devices and their associated frequency bands. 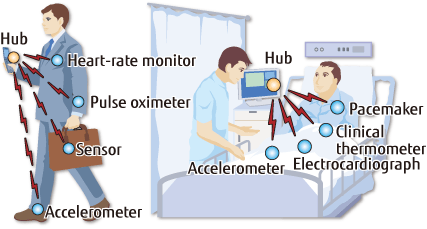 What are the technical requirements for MBAN Devices?

The transmitter must cease operating in the 2360-2390 MHz band if it does not receive a control message permitting such operation such as when the device is out of range or operated outdoors. The shutdown process shall commence within 45 mS after loss of the communication link or receipt of the shutdown command form the MedRadio programmer transmitter. Transmissions may be redirected from the 2360-2390 MHz band to the 2390-2400 MHz band by use of a control message.

An aggregate channel bandwidth of up to 5 MHz – consistent with existing MedRadio rules.

+/- 100 ppm over 0°C to 55°. The temperature range was expanded from the MedRadio requirement to allow for limited outdoor operation.

The FCC feels it is unnecessary to specify protocols to ensure spectrum sharing among MBAN systems and does not wish to adopt detailed procedures that might inadvertently inhibit the development of innovative methods that would allow more intensive use of the spectrum. Although note required, it is expected that contention-based protocols, including listen-before-talk (LBT), frequency monitoring, time slot synchronization and frequency hopping may be utilized.

The FCC expects that MBAN manufacturers will determine the appropriate level of communications reliability through the risk management activities involved with medical device design that is subject to oversight by the Food and Drug Administration (FDA). MBAN manufacturers should be given the flexibility to meet that level of communications reliability through whatever means they find appropriate. Because of frequency coordination for MBAN and AMT sharing, the FCC feels it is not necessary to adopt frequency monitoring rules to promote spectrum sharing between these services.

The FCC has decided not to adopt specific duty cycle limits, which typically allow the implementation of a contention-based protocol for achieving reliable MBAN system performance although the FCC indicates that manufacturers are likely to employ duty cycles.

MedRadio operation is authorized anywhere CB station operation is authorized except that use of Medical Body Area Network devices in the 2360-2390 MHz band is restricted to indoor operation within a health care facility registered with the MBAN coordinator. A health care facility includes hospitals and other establishments that offer services, facilities and beds for use beyond a 24 hour period in rendering medical treatment, and institutions and organizations regularly engaged in providing medical services through clinics, public health facilities, and similar establishments, including government entities and agencies such as Veterans Administration hospitals. 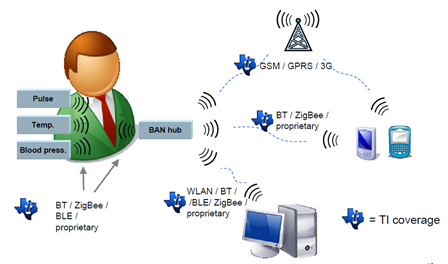 Frequency Registration and Coordination: The frequency registration and coordination are two separate but related processes. A health care facility that intends to operate a MBAN in the 2360-2390 MHz band must register the MBAN with a frequency coordinator (“the MBAN coordinator”) that the FCC will designate. The registration requirement will ensure that the locations of all MBAN operations in the 2360-2390 MHz band are recorded in a database. As part of the coordination process, the MBAN coordinator will first determine if a proposed MBAN in the 2360-2390 MHz band will be within line-of- sight of an AMT receiver. If the MBAN transmitter is within line-of-sight of an AMT receiver site, the MBAN and AMT coordinators will work cooperatively to assess the risk of interference between the two operations and determine the measures that may be needed to mitigate interference risk. The MBAN coordinator will notify the health care facility when coordination is complete and the MBAN must operate consistent with the terms of any agreement reached by the coordinators. If no agreement is reached, the MBAN will not be permitted to operate in the band

MBAN Rules and Regulatory Updates in 2014 and beyond

With regulatory standards in place and a frequency coordinator to be selected shortly, semiconductor manufacturers can be expected to release MBAN compatible transceiver chipsets sometime in 2013. Based upon the regulatory requirements both a direct sequence spread spectrum (DSSS) similar to IEEE 802.15.4/ZigBee and a Frequency Hopping Spread Spectrum (FHSS) appear viable platforms that would allow multiple MBAN sensors to coexist within the same network. Because the FCC felt it unnecessary to specify protocols or other methods that would assure robustness and interoperability, each developer will need to determine their own level of communications reliability. This will need to occur at the system protocol level to allow coexistence of many MBANs devices within a hospital and at the hardware level, and to provide a degree of robustness to and from other high power wireless devices within the hospital, especially Wi-Fi devices that use the adjacent 2400-2483.5 MHz spectrum. It is also expected that the FCC will initially adopt a “permit but ask” policy that is typically associated with new technology, where devices are required to be tested and approved directly by the FCC test lab. In addition to the FCC approval, MBAN devices will also need to receive FDA approval before they can be used in hospitals.

Link to FCC Report and Order for MBAN