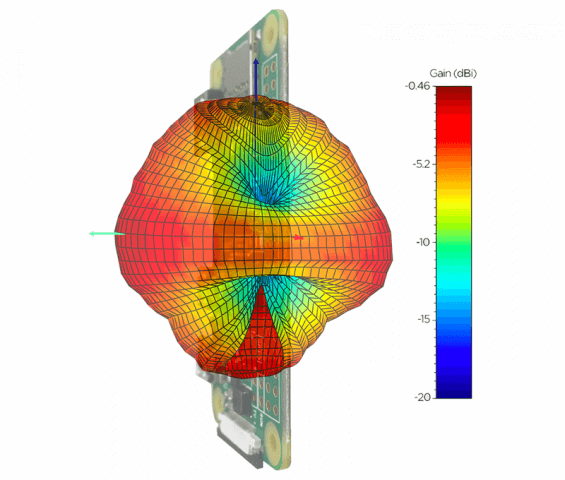 Wireless signal and other RF behavior is one of those things that is so nuanced and bizarre it’s often described by engineers as black magic. The complexity of RF design is legendary among engineered physics. One Redditor explains it this way: “Reality is far more complex than you are led to believe with lumped model electronics.” And one of the biggest problems in understanding anything related to RF is visualizing its concepts. It doesn’t lend itself neatly to pictures and graphics. It’s something that’s hard to translate into our physical experience of the world.

Most explanations for beamforming are highly technical and invoke representations of extremely complex RF behavior. But they don’t well address the core question of what is happening in 3D space when we talk about beamforming. They end up making beamforming seem even more like a form of wizardry. While pulling it off is an impressive and complicated technical achievement, the concept behind beamforming is quite straight forward.

Beamforming creates zones of stronger signal. In this blog post, we’ll look at what beamforming is, how it’s employed (especially in Massive MIMO [MMIMO] networks), and what can be done with this technology to improve user experience within the network.

Understanding beamforming begins with thinking about generally what’s happening when a wireless signal is created. When it comes to this example, it’s most useful to think about wireless signal as a wave starting at the antenna and rippling outwards, like this:

Setting aside that RF has that mysterious quality of behaving like particles AND waves at the same time, this is a useful way to think of signal: like a ripple in a pond but moving in three dimensions. It’s a huge oversimplification, but it helps us visualize what beamforming is.

In a MIMO or MMIMO system, you have multiple antennas radiating the same signal. Also, like waves on a pond, the interaction of those waves can have complex effects. Waves can interact and negate or amplify each other based on their phase when they collide. This can have negative effects if the system doesn’t compensate for this fact and can lead to poor signal (where waves cancel and neutralize each other). However, this also means that a clever system can amplify signal by colliding in just the right way. That collision can be targeted to improve reception for targeted devices. This is the core principle that enables beamforming. To begin, the base station (for example, a cellular tower) determines the best path to a client device. It uses an algorithm to decide how to communicate to that device with minimal interference to other devices. It then adjusts the phase and amplitude of signal coming from multiple antennas to produce a pattern of boosted signal in the right places. Multiple antennas located in the same place can be slightly out of sync with each other, which causes the areas where signal overlaps to move spatially in one direction or another. This precise control creates the desired beamforming effect, right to the device as needed.

A version of beamforming is in use in some Wi-Fi home routers, which take advantage of this concept to bring stronger connections to devices within the home. This can make a central router more effective, work through disruptive and signal-blocking elements in the home, or work around corners to bring more complete coverage. Some home routers utilize anywhere from a few to a dozen antennas to achieve this effect with varying degrees of accuracy.

Scaling Up: Beamforming on a Massive Scale

Our above example only illustrates two antennas, but it’s important to realize beamforming can be coordinated across hundreds upon hundreds of antennas, forming a very complex pattern of radiation. Consider the application of this principle, for example, in three dimensions, where multiple antennas are used to target the signal to the left/right, up/down, and near/far. With hundreds of antennas at their disposal, base stations can make incredibly complex and precise adjustments to a signal in milliseconds. This means sending targeted traffic, without interfering with other devices on the network. As devices move around the network, the base station can adjust the phase and amplitude of outgoing signals to continue to optimally serve an individual device. All of this happening for thousands of devices on a network is a staggering thought. It is however all completely possible with massive MIMO installations in a fifth-generation cellular network.

5G brings unparalleled connectivity for more users in part due to techniques like beamforming. Whole office buildings and schools can be targeted by a cell tower for optimized signal. Rural or sparse environments can enjoy better signal at longer ranges with a carefully targeted connection. 5G brings more flexibility and smarter connections to users wherever they are and does so for an incredible volume of users.