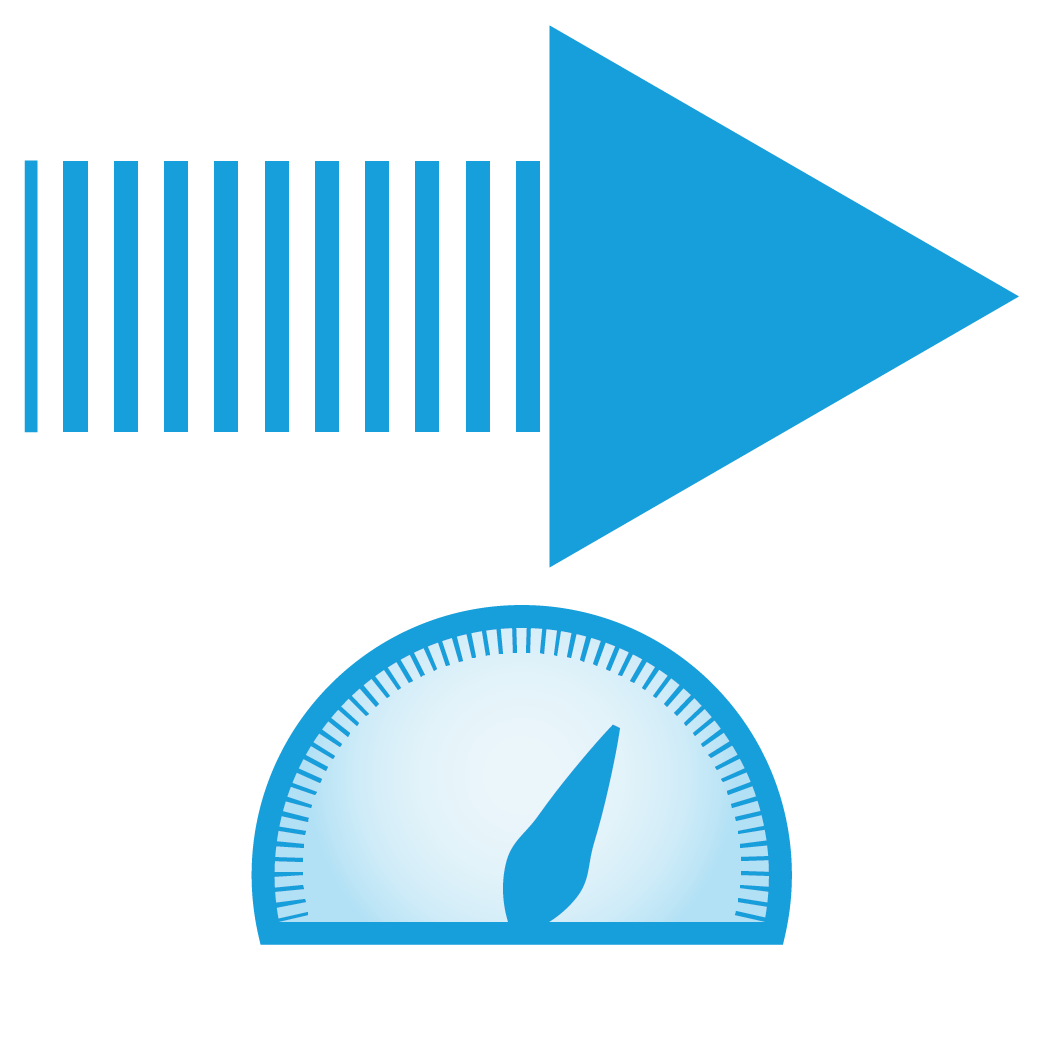 This blog post is the second in a series of articles we’ll be presenting over the course of 2022 about WiFi 6 (and WiFi 6E) – the current and future top-of-the-line WiFi standards championed by the WiFi Alliance. We’ll be discussing the history of the evolving standard of WiFi, new features introduced in WiFi 6 and 6E, applications beyond the commonly known consumer use cases, and much more. Additionally, we’ll be releasing a companion series of video interviews with Laird Connectivity experts, which you can find here.

In our introductory blog post on WiFi 6 and 6E, we covered the history of WiFi and how it’s been used to serve an ever-evolving list of applications. WiFi became the default standard in wireless networking by constantly evolving to meet users’ needs. And along the way to WiFi 6 and 6E, that has translated to a 480x increase in deliverable link rates for WiFi client devices.

Today’s wireless ecosystem has demands that would have been thought impossible in 1999; 4K video streaming, multitudes of lower-resolution security-type video monitoring, telepresence tools and remote surgical devices, and other applications have extreme demands. Lots of data throughput, low latency requirements, and more are manifest in today’s emerging wireless devices. WiFi 6 and 6E are ready to deliver on those requirements.

That’s the “what” of the WiFi standard’s evolution. In this post, we’re looking at the “how,” specifically the sub-features, modulation schemes, channel configurations, stream topologies, and more that enable WiFi 6 and 6E to deliver 9.6 Gbps maximum data rate across 8 spatial streams (1.2 Gbps per stream), a truly impressive upgrade over the 3.5 Gbps total made available in Wi Fi 5 and how they relate to your applications and how you can use them, to create industry leading solutions.

What Drives Link Rates? Anatomy of a WiFi Link

So, what is it that WiFi 6 and 6E have that was unavailable to previous generations of WiFi? The last 20+ years have yielded many changes in computing power and hardware, as well as regulatory changes to provide more available spectrum and new techniques that help spread signal across larger channels with more simultaneous inputs and outputs. The short answer to the evolution of WiFi is a combination of a few factors: more efficient Quadrature Amplitude Modulation (QAM), access to wider channels (especially those in the 6 GHz spectrum), and a doubling of the available spatial streams.

Quadrature Amplitude Modulation is one of the concepts inherent in wireless communications that is somewhat difficult to explain but is critical to the function of any wireless link. It works by manipulating a primary wave and a secondary wave to create a new wave that is the result of those two waves colliding in the air.

The specifics of how this works are beyond the scope of this blog post, and we’ll be addressing them in more detail in an upcoming white paper. However, the basic mechanism is this: Two RF waves are created slightly out of phase with each other in a very precise way to create a unique new wave with its own unique value. Much like waves in water collide to cancel or amplify each other, colliding radio waves produce a new wave with their own translational value.

In 1024 QAM, part of the 802.11ax standard, this value represents 10 binary digits in a time frame that decades ago could only yield a 1 or a 0. This single aspect of WiFi 6 and 6E, therefore, yields a 25% increase in data throughput at the same clock speed over 256-QAM, the previous implementation, which yields 8-digit values.

A central characteristic of WiFi 6 and 6E is the capability to serve more devices and serve them all better, no matter their application’s needs. WiFi devices come in many, many forms: low-bandwidth sensor-type devices, multi-purpose devices like smartphones, bandwidth hogs like 4K TV streaming devices, and more. WiFi’s strength has also become its latest challenge: WiFi devices are everywhere in greater numbers, they’re all connected continuously, and they all must make sure their data gets where it needs to go, on time, and unimpeded.

Worldwide regulatory changes are still underway around the availability of new spectrum for WiFi, a process that takes time and legislative action to complete. But in regions where it’s available, the addition of spectrum in the 6 GHz band is a historic change that is the greatest expansion of usable spectrum in decades.

It’s critical to note: The availability of spectrum in the 6GHz spectrum is still being deployed around the world. That’s because the rollout of WiFi 6 has been marshalled into two phases: WiFi 6, which introduces many of these other features and improvements, and WiFi 6E, which will later expand it all into the available 6 GHz spectrum. That transition will eventually largely be considered the final version of WiFi 6, and referred to as WiFi 6. Most, if not all, of the regulatory bodies around the world have approved and are making the 6 GHz band available. The good news and the process is ongoing and progress has been significant in just the last 24 months.

The FCC, for example, has taken the lead in making this entire 1.2 GHz of spectrum available. This translates to over 12x more available spectrum than was defined in the whole of the 2.4 GHz band. That frequency can be divided up in various ways, as needed by the network and its clients. It constitutes 56 non overlapping channels at 20MHz width (plus an additional 4 channels fixed at 20 MHz), 29 channels at 40 MHz bandwidth, 14 channels at 80 MHz bandwidth, or 7 channels at 160 MHz bandwidth.

Wider channels, and the utilization of “channel bonding” introduced in WiFi 4, increases the throughput of a device utilizing those channels. This means more spectrum dedicated to a single device, but with better results. It’s particularly helpful for the kind of applications that require a high transfer of data, such as high-fidelity video.

The dynamic and flexible nature of these channels is an extension of the previous channel division schemes in the 2.4 GHz and 5 GHz band, but with significantly more to work with. 6 GHz provides more frequency than was available in the whole of the 2.4 GHz and 5 GHz band and is suited to both extremes in terms of wireless device needs and utilization: lots of low-bandwidth devices and a few high-bandwidth applications can more easily share the same infrastructure than ever before.

This enables something that was possible in theory in WiFi 5, but rarely happened in practice. The limited amount of spectrum meant that while larger 40 MHz and 80 MHz channels were available, most deployments still primarily utilized 20 MHz channels, in order to support a typical volume of concurrent devices. It’s only now with the huge expanse of 6 GHz spectrum that the promise of wideband channels has become not just possible, but practical as well. 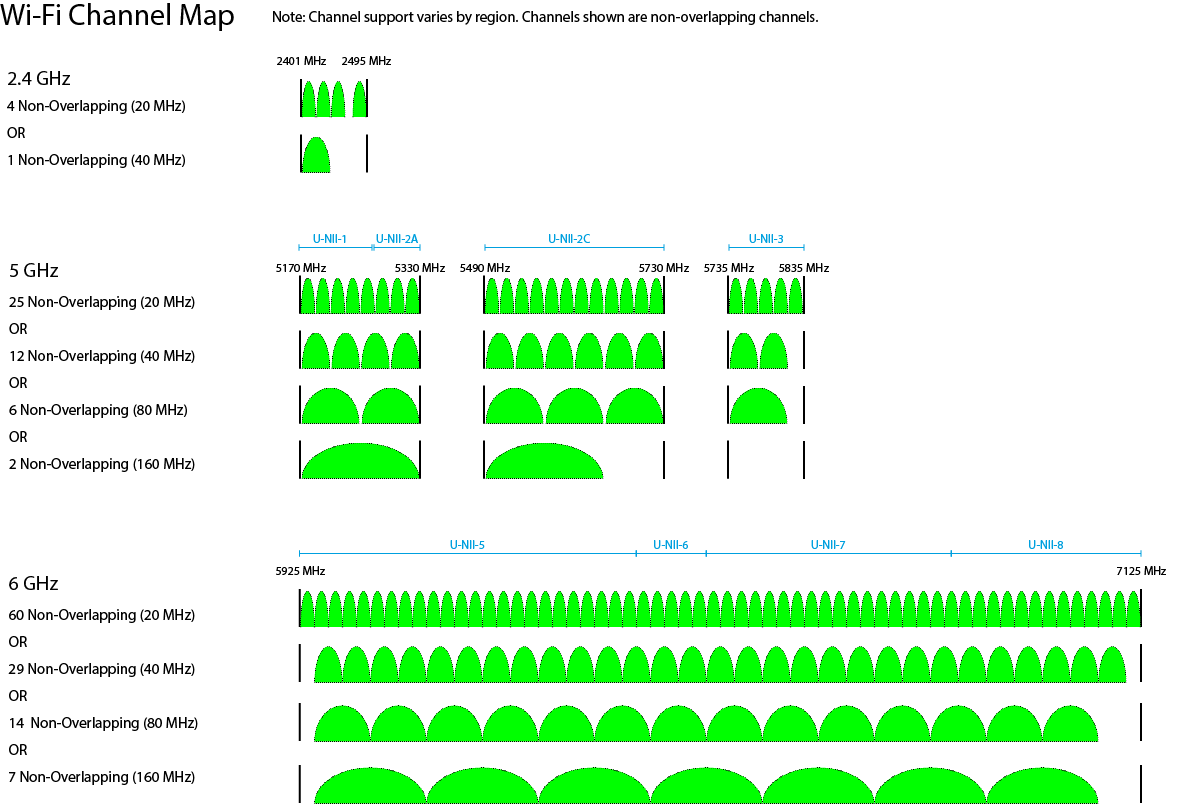 In WiFi 6 and 6E, as many as 8 individual spatial streams are possible, double what was previously possible in WiFi 5. MU-MIMO has multiple uses, but one of its primary functions is to split a link into more than one simultaneous stream which is reconstructed at the receiving end, effectively sending twice as much data at once. The AP uses a technique called beamforming to concentrate signal in the physical direction of the client, and then creates one or more simultaneous spatial streams within that beam to allow higher throughput.

Here's a simplified version of how it works: Picture two antennas on the sending end (the access point) and two on the receiving end (the client). The antennas are placed at a very specific distance from each other on the access point, and the same on the client. The APs use a protocol to send two streams to the client, and the information they report back is enough to help the AP calculate the path and phase delay needed to target a beam at the client. By using more antennas, a client can be allocated multiple spatial streams and communicate in more than one stream simultaneously with the AP.

This is the result of at least two antennas and two coordinated signals, in 2x2 MIMO. With WiFi 6’s MU-MIMO and its 16 possible antennas, this allows all the way up to 8 spatial streams coordinated across two antennas each.

Boiling This All Down: The Modulation Coding Scheme (MCS) index

If all of this weren’t complex enough, the permutations of all of these features lead to lots and lots of individual implementations for a wireless link. It quickly becomes a very complex scheme of possible configurations. That’s where the MCS table comes in: a way to simplify the many complex variables in different connection types into a digestible chart that shows what’s possible in the interaction between data rates, channel widths, spatial streams, QAM values, and the data rates possible as a combination of them.

The full MCS table is large, complex, and encompassing of the many possible link rates in a WiFi connection. A comprehensive illustration of it can be found at www.mcsindex.com, the creation of engineer François Vergès. In the latest instance of this table, QAM values for WiFi 4 (labeled as HT), WiFi 5 (VHT), and WiFi 6 (HE, the new additions) are seen at left. MCS index values 9 through 11 are the latest additions, with 11 being the highest possible data rate in each section. Number of spatial streams, modulation types, and coding are further options, which eventually are matrixed against channel widths and guard intervals (GI) to calculate the theoretical data rates in a link with all of these characteristics.

It is a significant work of great complexity, and it helps illustrate the core takeaway here: There are many, MANY factors that add up to final data rates. No individual feature or configuration does all the lifting in generating the staggering data rates that are (and will be) possible in WiFi 6 and 6E.

Applications: Putting This All to Use

So with all this established: What applications can benefit from transitioning to WiFi 6 and 6E?

We’ve focused quite a bit on the applications which have the highest demands for throughput, which undoubtedly benefit significantly from a huge increase in link rates. For example: medical imaging equipment, which deals in tremendous amounts of data, is certain to benefit. Surveillance systems, which may feature dozens of collocated cameras, sensors, and interface panels, are sure to benefit from the enormous data pipeline available in WiFi 6 and 6E. AI and machine learning systems, which are only as good as the volume and accuracy of data that are fed into their algorithms, will be better served by more data points fed into them more consistently.

But that is one half of the story. The other half, critically, is that all of those high-bandwidth applications are now better-able to leave larger regions of the spectrum unused, allowing a high volume of devices to comfortably occupy the remaining part of the WiFi spectrum. Interference from high-demand devices becomes much less of an issue. The lightweight WiFi applications that have exploded in recent years have much more availability for their traffic. And as we will explore in later blog posts, issues like low latency demands, an increase in device density, better power usage and more are all intertwined and served by WiFi 6’s improvements in terms of QAM, channel usage, spectrum, and spatial streams.

By now, hopefully it’s clear that WiFi 6 and 6E are a highly ambitious reworking and improvement on the capabilities that make WiFi so effective in the first place. In our next post, we’ll be exploring low latency in WiFi 6 and 6E, which deals more with the access point’s ability to prioritize traffic, share spectrum between multiple access points, and serve a crowded space with smarter management of traffic and spectrum.