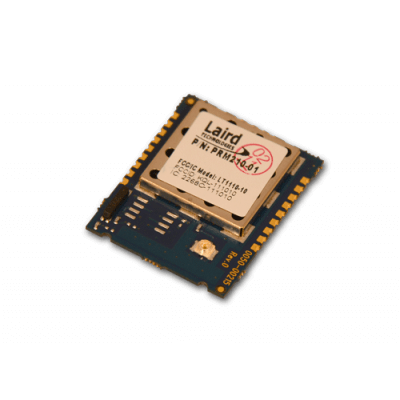 Laird's third generation 915 MHz FHSS module sets yet another standard for industrial RF communication. Based on proprietary FlexRF technology, this globally-accepted module will exceed most OEM application and performance requirements. Embedded with Laird's robust server-client protocol, the LT1110 permits an unlimited number of clients to synchronize to a single server for low latency communications. The server and all clients in a network can communicate with any radio in range via either addressed or broadcast packets. The configuration and test software allows OEMs to design and test networks to suit their applications. The enhanced API commands provide packet routing control and network intelligence. With its field-proven proprietary FHSS RF protocol and increased penetration at 915 MHz, the LT1110 rejects RF noise, excels in multipath scenarios, allows for co-located systems, and provides an extremely reliable communication link.

Note: Some variants of the LT1110 and related DVK and SDK variants have reached end of production and are available on a limited basis only. Find the End of Life Announcement in the Documentation tab below. Only the following part numbers are affected:

Can I choose an RF Channel that is outside of Wi-Fi interference on the RAMP radios?

The RF Channel setting in our Laird RAMP modules and radios is not a true RF Channel or frequency of operation, it is actually just specifying a psuedo-random hopping sequence. The radios must, per the FCC, hop through every frequency in the band.
The RF Channel setting is only choosing a hopping pattern for navigating through all of the channels but each channel will be hopped to within a single pattern.

In the Laird RAMP line of products there is a feature called Full Duplex that leads one to believe they can talk upstream and downstream simultaneously. This is not the case, Full Duplex in the RAMP products gives a dedicated slot within the frame to the Server or Initiator and the second slot or next frame to the Client or Responder.

Yes it is acceptable to implement a UART design which only uses TX (Transmit), RX (Receive) and Gnd (Ground)  However, it is strongly recommended that your hardware monitor the CTS pin of the radio.  CTS is taken High by the radio when its interface buffer is getting full.  Your hardware should stop sending at this point to avoid a buffer overrun (and subsequent loss of data).

You can perform a successful design without monitoring CTS.  However, you need to take into account the amount of latency the radio adds to the system, any additional latency caused by Transmit Retries or Broadcast Attempts, how often you send data, non-delivery network timeouts and interface data rate.  Polled type networks, where the Server host requests data from the Client host and the Client host responds, are good candidates for avoiding the use of CTS.  This is because no one transceiver can monopolize the RF link.  Asynchronous type networks, where any radio can send to another radio at any point in time, are much more difficult to implement without the use of CTS.

I am not achieving the range documented in your manual, why not?

The range documented in our manual is the "theoretical" range, based on what is documented for the radio's chipset as achievable. The actual range is impacted by many factors, including but not limited to:

To improve the range in your intended application we recommend the following:

Should I used Broadcast mode or Addressed Mode?

<p><strong>Broadcast Mode</strong> causes a radio to transmit to all radios on the same network in that coverage area. Broadcast mode can be configured on all devices in a network for a simple deployment.

It is typically configured on a server or device acting as the server/master in point-to-multipoint applications to enable the server to transmit its data to all devices on the network.

Broadcast mode does not send an RF Acknowledgement from the receiver on successful receipt of the packet, because there are multiple radios listening to the transmission.

Therefore, the transmitter will send every packet out the number of times specified by the Broadcast Attempts setting.

<p><strong>Addressed Mode</strong> causes a radio to transmit to a specific radio on the network using the radio MAC Address to determine the receiving radio.

The MAC Address of the intended receiver is configured as the Destination Address.

When working with the masterless protocol of the AC4790/CL4790 the peers can be direct addressed to each other for point-to-point,

or for point-to-multipoint, the ones acting as clients/slaves would be direct addressed to the one acting as the server/master.

<p>In Addressed Mode, the radio uses Transmit Retries to increase the odds of successful delivery. With Addressed Mode the receiver will send a RF Acknowledgement upon successful receipt of the packet.

Therefore, the transmitter will only use as many retries as are required to successfully deliver the packet.

<p>Broadcast Mode is simple to deploy and is, therefore, very attractive to many designers.

However, Broadcast Mode introduces much more RF latency to a system than Addressed Mode due to the fact that there is no RF Acknowledgement.

Many systems will use both methods.  For instance, in a network comprised of an access point and several clients/slaves to that access point,

As per section 3.10 of the Laird Configuration and Utility User Guide, [Show Defaults] settings should ONLY be used as a reference and should NEVER be written to the radio.

Writing the "show defaults" settings to a radio can result in the unit entering an unrecoverable state (bricked). If the radio enters this state a new radio must be purchased, it can not be repaired. After viewing the default settings using this feature, you should ALWAYS read the current settings using [Read Radio] prior to writing any changes to the radio with [Write Radio].

On the RAMP radios, what is the difference between "Broadcast Attempts" and "Max Transmission Retires"?

When the radios are Direct addressed to each other, meaning the MAC Address of the paired receiver radio is configured in the Destination Field, they are in what is known as Addressed Acknowledge Mode. When in this mode, the RF packet is sent out to the receiver designated by its Destination Address. Max Transmit Retries is used to increase the odds of successful delivery to the intended receiver. Transparent to the OEM (Other Equipment Manufacturer) Host - your device, the transmitter will send the RF packet to the intended receiver. If the receiver receives the packet free of errors, it will send the transmitter an acknowledgement. If the transmitter does not receive this acknowledge, it will assume the packet was never received and retry the packet. This will continue until the packet is successfully received or the transmitter exhausts all of its retries. The received packet will only be sent to the OEM Host if and when it is received free of errors.

When the radio is configured in Broadcast mode, by enabling Broadcast in the Radio Features section, the radio is in Broadcast Acknowledge Mode. While in this mode, the RF packet is broadcast out to all eligible receivers on the network. Broadcast Attempts is used to increase the odds of successful delivery to the intended receivers. Transparent to the OEM Host, the transmitter will send the RF packet to the receivers. If a receiver detects a packet error, it will throw out the packet. This will continue until the transmitter exhausts all of its attempts. Once the receiver successfully receives the packet it will send the packet to the OEM Host. It will throw out any duplicates caused by further Broadcast Attempts. The received packet will only be sent to the OEM Host if it is received free of errors.

Please reference the Approved Antennas list in the Datasheet (Hardware Integration Guide) for the specified ConnexLink Unit, or module.

As noted in the Datasheet, you may use different antenna manufacturers than those listed as long as the antenna is of like type, and equal or lesser gain with similar characteristics to one of the ones listed.

Unfortunately, no. The AC4490/CL4490 and AC4790/CL4790 can only be upgraded using a special tester (programming) device. However, radios should ship with the most current (stable) version, as there have not been any updates to the firmware for many years.

Other variations in firmware, indicated by the -01, -02, -03 included in the part number are regionally significant, and must be purchased with the correct firmware version for the region the radio will be deployed. The regional firmware versions cannot be interchanged on the radios. Please see FAQ: What is difference between AC4490/AC4790 product part numbers that end with -01, -02, -03? for additional information on the regional variants.

Note: if the part number does not include a -xx then it is loaded with the FCC/IC (-01) firmware.

Do any of the RAMP products support XON-XOFF?

Xon-Xoff is not supported on any of our RAMP products. Flow control (handshaking) uses hardware RTS and CTS.

What is Sync-to-Channel and do I need it?

We run frequency hopping protocol on our transceivers with a fixed pseudo-random hopping sequence. This protocol yields superior interference rejection and multipath immunity.  The Server radio sends timing beacons out on a regular interval.  The Clients hear these beacons and synchronize their frequency hopping to the Server.

Why is this important?  If two Servers (and their Clients) are operating in the same area and their frequency hopping is not synchronized to each other it’s possible that they might try to occupy the same frequency at the same time.  In severe cases, they could interfere with each other on every frequency, causing very sluggish communications.

What is the default UART baud rate for RAMP modules?

The default baud rate for RAMP modules is as follows:

I am able to test with the Development Kit hardware or ConnexLink Unit connected to my PC, but it does not work in my actual application, why not?

There are a number of issues that can prevent the RAMP development kit hardware or ConnexLink unit from functioning in your application. Here are a few: