Washington, D.C.—The Federal Communications Commission (FCC) has advanced its wireless health care agenda by adopting rules that will enable Medical Body Area Networks (MBAN), low-power wideband networks consisting of multiple body-worn sensors that transmit a variety of patient data to a control device. MBAN devices free patients from cumbersome cables that tether them to their hospital beds. MBAN devices provide a cost effective way to monitor every patient in a healthcare institution, so clinicians can provide real-time and accurate data, allowing them to intervene and save lives. Wireless devices that operate on an MBAN spectrum can be used to actively monitor a patient’s health, including blood glucose and pressure monitoring, delivery of electrocardiogram readings, and even neonatal monitoring systems. MBAN devices will be designed to be deployed widely within a hospital setting and will make use of inexpensive disposable body-worn sensors. MBAN technology will also make it easier to move patients to different parts of the health care facility for treatment and can dramatically improve the quality of patient care by giving health care providers the chance to identify life-threatening problems or events before they reach critical levels. 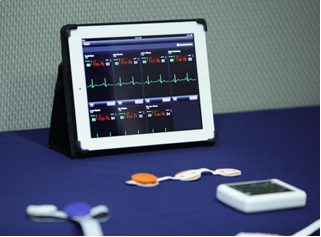 Currently almost 50% of all patients in U.S. hospitals are not monitored. FCC Chairman Julius Genachowski stated that MBAN systems will enable patient monitoring in real time that is both accurate and cost-effective. “A monitored patient has a 48% chance of surviving a cardiac arrest. Unmonitored patients have a 6% chance of survival.” By allowing for continuous monitoring of patients, MBAN enabled devices can help doctors respond more quickly in emergency situations and improve overall in-home patient care as well. According to the FCC, this action “represents an improvement over traditional medical monitoring devices,” as it makes it easier to move a patient, allows for increased patient comfort, and could represent annual savings of $1.2 billion in expenses accrued after relocating patients to different clinics and departments.

FCC Rules and Regulations for MBAN

This final ruling sets aside 40 MHz of protected spectrum in the 2360-2400 MHz band specifically for wireless medical devices. Dedicated spectrum should help alleviate the interference problems normally associated with Wi-Fi and other high-powered devices used in hospitals. The 2360-2390MHz frequency range is available on a secondary basis. The FCC will expand the existing Medical Device Radio communication (MedRadio) Service in Part 95 of its rules. MBAN devices using the band will operate under a ‘license-by-rule’ basis, which eliminates the need to apply for individual transmitter licenses. Usage of the 2360-2390MHz frequencies are restricted to indoor operation at health-care facilities and are subject to registration and site approval by coordinators to protect aeronautical telemetry primary usage. Operation in the 2390-2400 MHz band is not subject to registration or coordination and may be used in all areas including residential.

Small, wearable sensors monitor patients’ vital signs and collect real-time clinical information such as temperature, blood glucose levels, blood pressure, pulse and respiratory function, and aggregate it over an MBAN at a nearby device for local processing and forwarding to centralized displays and electric medical records. Body sensors can also be used to deliver medical therapy to particular areas of the body. 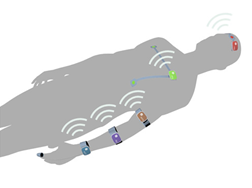 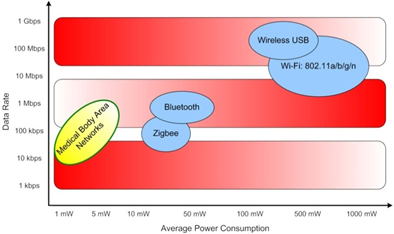 What is an MBAN network?

The FCC defines a Medical Body Area Network (MBAN) as a low power network consisting of a MedRadio programmer/control transmitter and multiple medical body-worn devices all of which transmit or receive non-voice data or related device control commands for the purpose of measuring and recording physiological parameters and other patient information or performing diagnostic or therapeutic functions via radiated bi- or uni-directional electromagnetic signals.

How does an MBAN system operate?

A typical MBAN consists of a master programmer/control transmitter (“hub device”), which is included in a device close to the patient, and one or more client transmitters (“body sensors”), which are worn on the body and only transmit while maintaining communication with the hub that controls the transmissions. The hub conveys data messages to the body-worn sensors to specify, for example, the transmit frequency that should be used. The hub and sensor devices will transmit in the 2360-2400 MHz band.

The hub aggregates patient data from the body-worn sensors under its control and transmits that information, using the health care facility’s local area network (LAN) (which could be, for example, Ethernet, WMTS or Wi-Fi links), to locations where health care professionals monitor patient data. The hub also connects via the facility’s LAN to a central control point that will be used to manage all MBAN operations within the health care facility. Neither body sensors nor programmer/control transmitters may communicate directly which other.

To protect AMT operations from harmful interference, MBAN and AMT frequency coordinators will work together to coordinate MBAN operations in the 2360-2390 MHz band. The control point serves as the interface between the MBAN coordinator and the MBAN master transmitters to control MBAN operation in the 2360-2390 MHz band. The control point will receive an electronic key which is a data message that specifies and enables use of specific frequencies by the MBAN devices. The control point, in turn, will generate a beacon or control message to convey a data message to the hub via the facility’s LAN that specifies the authorized frequencies and other operational conditions for that specific MBAN.

As of October 1, 2012 devices are permitted under the FCC’s “license by rule” standards under which healthcare providers must register their devices and coordinate how and when they are used. However, the FCC is not expected to appoint a frequency coordinator until June, 2013 and according to GE Healthcare, “MBAN devices are expected to hit the market in about 2 years.” Several of the major semiconductor manufacturers have indicated their current 2400-2483.5 MHz ISM band chipsets used for ZigBee/Bluetooth can easily be modified or adapted to cover the 2360-2400 MHz MBAN spectrum. This should allow for rapid deployment of the technology.

Find out about compliance testing services from LSR.