Antenna Matching Within an Enclosure

Developing a wireless product can be a daunting task. There are many pitfalls, traps, and common mistakes people fall into during design and development. It is very common to save the implementation of the antenna for ‘last.’ The fact of the matter is that the antenna makes your product wireless. It is the most critical component that launches your signal into space. Often little consideration is given to the antenna location and how the object nearby can affect it. This can be devastating not only to a product’s performance, but also to schedule and cost.

An antenna is a function of its environment. Whether it’s sitting on a desk, on a manufacturer’s development board, or in a product, all three scenarios result in different performance. Unlike most components in a design that can be dropped in with an expected effect on the circuit, an antenna is affected by everything around it. The radiated electromagnetic fields from an antenna interact with nearby materials, and can change its frequency of operation. The antenna must be placed in its final environment and impedance matched so that it operates in the desired frequency band. A poorly matched antenna can degrade your link budget by 10-30 dB and severely reduce range. All antennas, whether they are off-the-shelf or designed in a lab may require matching.

To understand why an antenna is affected by objects near it, how an antenna radiates must be reviewed. First, forget about what is happening to the antenna or what is nearby. What is important is the input impedance to the antenna. Examining the dipole in Figure 1, when a potential is applied to the antenna inputs there is opposite charge buildup on the ends. Essentially the dipole ends can be viewed as open circuits, with a high voltage and no current. Due to the charge buildup at either end of the dipole, current begins to flow. As you move from the end of the dipole inwards towards the feed point, the voltage falls and the current rises. At the feed point the current reaches its peak along with some now reduced voltage. The ratio between the voltage and current at the feed point is the input impedance to the antenna. This is the impedance that drives the antenna performance. Additionally, since there is current flow on the antenna electromagnetic fields are radiating. 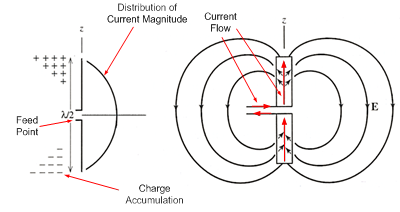 The antenna impedance changes with frequency because the current distribution is directly related to the wavelength. The current and voltage on the dipole form a sinusoidal distribution, so as the distance from the end of the dipole to the feed point varies by fractions of a wavelength, so does the impedance.

When the antenna is placed in an enclosure, the electromagnetic fields interact with the surrounding materials. As a result of this, the fields develop differently than they would in free space. This interaction ultimately changes the current distribution on the antenna, and consequently its impedance. This is why an antenna must be tuned in its final enclosure. The antenna impedance will shift depending on the proximity, electrical properties, and size of the surrounding materials. An antenna design can be ruined if it is not tuned properly during implementation.

Antennas can be tuned one of two ways. Either by adjusting the dimensions or with a matching network typically consisting of discrete components. Typically changing physical dimensions is not an option, so a discrete network is placed just before the antenna input. The challenge with tuning an antenna is that its impedance is affected by nearby materials. If you tune the antenna to 2.4 GHz on your bench and then place it in an enclosure, the tuned frequency will shift. Figure 3 below demonstrates this effect. The red line is the antenna in free space, unmatched. The green line represents the same antenna now matched in free space. And the blue line is the final antenna response with it placed in the enclosure. Since the antenna was not tuned in the enclosure the impedance is not matched to the 50 Ohm PCB trace line over the frequency of interest. The antenna must be tuned in the enclosure to allow for the changes in impedance to be accounted for. This is true for all antennas, including chip and other pre-packaged antennas. 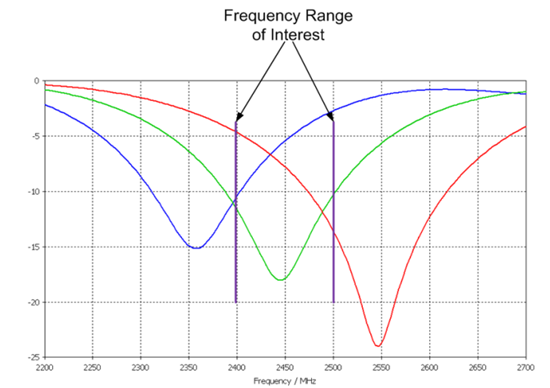 Figure 3: Frequency Shift of Antenna due to Mismatch

Johnny is the RF/EMC Engineer at LSR. Johnny graduated from Marquette University with a BSEE in 2008, and a MSEE in 2009. He has experience in the development of small custom antennas for 433 MHz, 900 MHz, 2.4 GHz, 5.9 GHz, and GSM bands. In addition to antennas; Johnny has worked as part of a team designing 900 MHz and 2.4 GHz wireless radio modules (including WiFi and Bluetooth modules). He has also developed range prediction software for low power, short range wireless devices. As a compliance engineer, Johnny has experience testing to FCC Part 15 and Industry Canada standards.