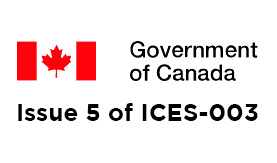 In late August, Industry Canada officially announced the release of issue 5 of ICES-003 - Information TechnologyEquipment (ITE) - Limits and methods of measurement; formerly issue 4 of ICES-003 - Digital Apparatus.  Industry Canada has given notice that a transition period ending August 31, 2013 will allow demonstration of compliance to either issue 4 or issue 5 of ICES-003; however, after this transition period, only issue 5 will be accepted.

Issue 4 of ICES-003 applied to any electronic apparatus which generates a timing signal greater than 10kHz, and/or utilizes RF energy for functions such as computations, operations, transformations, recording, filing, sorting, retrieval and transfer; but is not utilized in industrial, scientific, or medical applications.  Issue 4 of ICES-003 references CAN/CSA CISPR 22:02, which is harmonized to IEC CISPR 22 1997, with minor deviations allowing concurrent harmonization with FCC requirements.

There are significant changes to the EMC testing for Emissions in issue 5 of ICES-003. Foremost, the title of the document has changed from ICES-003 - Digital Apparatus to ICES-003 - Information Technology Equipment (ITE) - Limits and methods of measurement; and it has incorporated the EMCAB-3 guidance document.  For the purpose of this standard, ITE is defined as device(s) or system(s) that is an unintentional radiator which generates or utilizes timing signals greater than or equal to 9kHz; and employs digital techniques for computation, display, data processing, storage, and control.

The classifications of limits for ITE in ICES-003 have not changed significantly, as the CLASS A for commercial, business, and industrial environments and CLASS B for residential environments are still applicable; and ITE tested to ICES-003 are approved through the method of SDoC, or Self Declaration of Compliance by the manufacturer, importer, or distributor.  It is important to note that any classification made for the SDoC is consistent throughout testing, and no intermixing of CLASS A and CLASS B limits is permitted.

ICES-003 references CAN/CSA CISPR 22-10, which is harmonized to IEC CISPR 22 2008; additionally, it also now references the latest version of ANSI C63.4 (American National Standard for Methods of Measurement of Radio-Noise Emissions from Low-Voltage Electrical and Electronic Equipment in the Range of 9kHz to 40GHz).  Both of these reference standards have methods of measurement for conducted and radiated emissions, and most significantly, ICES-003 now has specifications up to 6GHz (where previous versions only specified up to 1GHz).

Notably, only one standard may be utilized to demonstrate compliance; if CAN/CSA CISPR 22-10 is used, then the measurement method, limits, and test site requirements as specified in said document must be observed.  Coincidentally, if ANSI C63.4 is used, then the measurement methods and test site requirements specified therein shall apply (when utilizing this method, the limits are specified in ICES-003; ANSI C63.4 does not contain any emission limits). In addition, the latest release of ICES-003 specifies requirements for Test Reports and Labelling in greater detail than previous versions.

These differences between the two versions of the standard as outlined herein are not meant to be all-inclusive, but are detailed to demonstrate and acknowledge the significant changes amidst issue 4 to issue 5.

Deprecated: explode(): Passing null to parameter #2 ($string) of type string is deprecated in /srv/www/html/functions.php on line 813